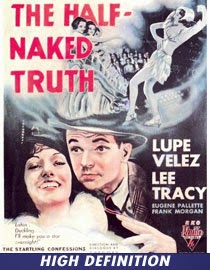 Lee Tracy was a popular star during the Pre-Code era; his fast talking banter made him a hit with audiences during the early days of sound, and he had a waggish quality that perfectly suited the looser moral attitude of the times. In The Half-Naked Truth (1932), Tracy plays the kind of role for which he was made, that of a scheming carnival barker whose ambitions are as boundless as his imagination. With Lupe Velez, Eugene Pallette, and Frank Morgan along for the ride, this corker of a comedy has plenty to offer fans of the Pre-Code period, and Gregory La Cava's direction keeps the action rolling from one ridiculous publicity stunt to the next. Slightly naughty, very silly, and bursting with Tracy's frenetic energy, The Half-Naked Truth aims only to entertain, but it succeeds admirably; it also makes a perfectly good introduction to Tracy and Velez for those who are new to the Pre-Code pantheon of stars.

Tracy plays Jimmy Bates, who starts out hawking the sideshow charms of hoochie coochie dancer Teresita (Lupe Velez) at a second-rate carnival. When one of Jimmy's schemes for publicity causes trouble, the pair head for the greener pastures of New York City with their pal, Achilles (Eugene Pallette), in tow. There they pass Teresita off as a Turkish princess until Jimmy manipulates a famous Broadway show director (Frank Morgan) into making Teresita one of his stars.

As the title suggests, the characters rely mostly on sex appeal and lies to get what they want. Lupe Velez shows quite a lot of skin in her skimpy harem costumes, and Tracy's protagonist couldn't tell the truth to save his own life. Neither one of them is a model of morality, but we like them in spite of that because they have a lot of spunk. Depression era Pre-Code characters need not be exemplars of righteousness to appeal to their audience; they just need to do whatever it takes to get by and have a little fun, and both Jimmy and Teresita embody that unsinkable can-do spirit. If one is a liar and the other a tart, well, who are we to judge?The movie encourages us to see Jimmy as a trickster in the same vein as Bugs Bunny; he's sometimes too smart for his own good, but he has his better nature, too, as the third act reveals. The cartoon sensibility of the picture might not be coincidental, since Gregory La Cava had started his career as a cartoonist.

The supporting players are probably more familiar to modern viewers than the stars, since Eugene Pallette and Frank Morgan both had memorable roles in later films. Pallette, who played the father of just about every leading lady in Hollywood at some point or other, is just as grumpy and rotund as we expect him to be; his character, Achilles, gets saddled with the stigma of being the Princess Exotica's castrated guard. Jimmy tells the staff at the Savoy, "You know, they have them in all Turkish harems. He's very sensitive about it." Poor Achilles doesn't even realize what Jimmy has done until the rumor undermines his romantic overtures toward a hotel maid. Jimmy also bamboozles and frustrates Frank Morgan's overwrought Merle Farrell, giving Morgan plenty of opportunities to bluster and react with his usual comic flair. Farrell is such a self-important big shot that we enjoy watching Jimmy outfox him, and the picture scene near the end really stands out.

For Gregory La Cava's best remembered work, see My Man Godfrey (1936), which features Eugene Pallette as Carole Lombard's father. Lee Tracy also stars in Blessed Event (1932), Dinner at Eight (1933), and Bombshell (1933). Lupe Velez starred in a series of Mexican Spitfire films beginning in 1940, but for more of her early roles see The Gaucho (1927), Where East is East (1929), and Kongo (1932). Frank Morgan is best known today as the bombastic Wizard (and several other characters) in The Wizard of Oz (1939), but he earned Oscar nominations for The Affairs of Cellini (1934) and Tortilla Flat (1942). Eugene Pallette, with more than 250 screen appearances, is everywhere in classic film. Look for him in The Adventures of Robin Hood (1938), The Mark of Zorro (1940), and Heaven Can Wait (1943) for starters.

The Half-Naked Truth is currently available for streaming on Warner Archive Instant.
Posted by Jennifer Garlen at 12:06 PM