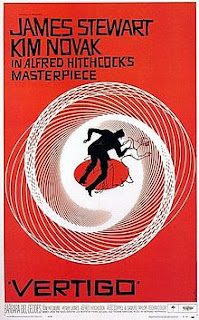 Alfred Hitchcock's films have been the gateway drugs for many a classic movie addict, and of all of his best-known thrillers, Vertigo (1958) is certainly the trippiest, a mind-blowing overdose of deception, desire, and betrayal. Set against the gorgeously atmospheric background of San Francisco, the film twists and turns as much as the city's famed Lombard Street, and the real scope of its perversity may require multiple viewings to appreciate fully. As black-hearted as the grittiest film noir, Vertigo is all the more sinister for its civil, romantic disguise; it unfolds slowly at first, seducing the viewer with its promises of redemption, but the finale reveals its true nature with one vicious, shattering blow.

Jimmy Stewart stars as John "Scottie" Ferguson, a former police detective whose fear of heights has resulted in the death of a fellow officer and Scottie's own resignation from the force. An old college friend named Gavin Elster (Tom Helmore) turns up and asks Scottie to tail his wife, Madeleine (Kim Novak), who has been drifting around town like a sleepwalker and doesn't seem to know what she does or where she goes. Gavin thinks she might be possessed by the spirit of a suicidal ancestor, and Scottie soon uncovers clues that suggest that a supernatural influence might be at work. He also falls in love with Madeleine, much to the dismay of his pining sometime girlfriend, Midge (Barbara Bel Geddes). Unfortunately for Scottie, the truth about Madeleine Elster turns out to be far more complicated than a mere ghost story.

Stewart gives a great performance as the damaged protagonist, and his nice guy persona makes an excellent disguise for the twisted heart that lies within Scottie Ferguson. His own perversion is merely hinted at in the early scenes with Midge, where he lounges about her apartment utterly oblivious to her misery and love. When he eventually meets up with Madeleine's double, Judy Barton (also played by Kim Novak), the real ugliness of his nature comes out. He twists and shapes her to suit his obsessive desire, ignoring her pain and her pathetic attempts to make him love her as herself. Kim Novak is actually more interesting as the brassy Judy than as the strangely wooden Madeleine, but Scottie's inability to appreciate that is just one of his many failings. Barbara Bel Geddes is absolutely heartbreaking as Midge, the only really likable character in the whole story and of course the one woman who can't get Scottie's attention for a minute. Her disappearance from the film before the final act signals the death of any hope that this story can end well; she walks out down a darkened hallway with terrible resignation, leaving Scottie to his ghosts, his madness, and his doom.

Aside from the wild camera work that dramatizes Scottie's vertigo and his moments of guilt-induced psychosis, we get stunning images of the city of San Francisco, sunnier and seemingly warmer than it is in real life but filled with angles and dips designed to make the most of Scottie's fear of heights. In many ways the city functions as another character in the film, one with its own secrets and desires. San Francisco has always been a cinematic town, but Vertigo capitalizes on its full potential as a setting for both romance and danger. All the best landmarks get their moments onscreen, and viewers might well lose their hearts to the fabled City by the Bay before the end credits roll.

Hitchcock also made Rope (1948), Rear Window (1954), and The Man Who Knew Too Much (1956) with Stewart. In the same year that they appeared in Vertigo, Stewart and Novak made Bell, Book, and Candle, a romantic comedy in which Novak's character really does turn out to have supernatural charms. For more Stewart hysteria, you might also try The Naked Spur (1953), a very Hitchcockian Western from director Anthony Mann. Vertigo was nominated for two Oscars in 1959 but was considered a failure at the time of its release. Luckily, time has proven a better judge of the picture's merits. In 2012, voters in the Sight & Sound poll actually selected Vertigo as the greatest film of all time, dethroning the long-standing champion, Citizen Kane (1941).

An earlier version of this review originally appeared on Examiner.com. The author retains all rights to this content.
Posted by Jennifer Garlen at 2:35 PM