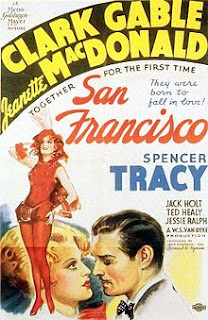 San Francisco has always been a cinematic town, with its storied history, its crooked, crazy streets, and its scenic bay views. The most famous San Francisco cinema tour is provided in Alfred Hitchcock's Vertigo (1958), of course, but the 1936 romantic drama, San Francisco, pens a different kind of love letter to the fabled city. Set in the months leading up to the catastrophic 1906 earthquake, San Francisco takes a 30th anniversary view of the disaster and brings some A-list talent along for the trip, including Clark Gable, Spencer Tracy, and Jeanette MacDonald. The result is a memorable tale of troubled love among the boozy haunts of the Barbary Coast, with a harrowing recreation of the earthquake as the picture's main event.

Gable leads the cast as Blackie Norton, a self-made night club proprietor with an eye for a pretty girl and an oddly generous nature. Despite his unethical lifestyle, Blackie's better urges have maintained his friendship with Father Mullin (Spencer Tracy), a childhood pal who grew up to be a Catholic priest. Their amiable differences of opinion are strained by the arrival of lovely singer Mary Blake (Jeanette MacDonald), whom Blackie sees as just another available love interest, even though Father Mullin argues that she's too good for the life Blackie has in mind. Mary feels torn between her feelings for Blackie, her yearning for respectability, and her chance at becoming an opera star with the help of a wealthy rival suitor. The earthquake, however, shakes up more than city when it forces each of the characters to rise to the occasion and admit what's really important in their lives.

The Blackie Norton character is a typical Gable role, full of swagger and fits of noble action that complicate our perception of him as an opportunistic rogue. Blackie runs illegal operations just like every other dance hall owner on the Coast, but his concern for the locals drives him to work for improved fire laws despite some heavy opposition. Spencer Tracy makes a perfect good angel to keep Blackie in check, especially since the job requires a commanding physical presence and even an occasional punch. Tracy actually earned his first Best Actor nomination for this performance, although he lost to Paul Muni for The Story of Louis Pasteur (1936). The setting and story give Jeanette MacDonald an excellent opportunity to show off her diverse vocal talent with dance hall tunes, opera numbers, and even religious songs. Good performances in the supporting cast come from Jack Holt as Blackie's rival, Jack Burley, Ted Healy as Mat, and Margaret Irving as Della Bailey, although Jessie Ralph is particularly adorable as Jack's Irish mother, Maisie.

In both the early fire and the later earthquake scenes, some of the special effects in San Francisco do show their age, particularly those shots in which people appear superimposed against miniature backgrounds and other artificial staging. Still, the depiction of the earthquake itself is remarkable, with sets collapsing everywhere and the ground opening up beneath terrified victims' feet. The scope of the disaster is admirably conveyed, as is the resilience and tenacity of the survivors. Jeanette MacDonald's repeated performance of the song, "San Francisco," provides the picture with its great theme, that the city, for all its flaws, is a beloved home to its citizens, and it will prevail in the end. I suspect that San Franciscans of 1936, many of whom had lived through the earthquake, got positively tearful at the movie's finale, and perhaps some modern admirers of the city will also find a little mist in their eyes.

San Francisco was directed by W.S. Van Dyke, although he remained uncredited for his work on the film. Oddly enough, that didn't stop him from being nominated for Best Director, and the picture earned six nominations in all, winning only for Best Sound. For more of Van Dyke's work, see Tarzan the Ape Man (1932) and The Thin Man (1934). Van Dyke also directed Jeanette MacDonald in Rose-Marie (1936) and I Married an Angel (1942); see more of her in Naughty Marietta (1935) and The Girl of the Golden West (1938). Clark Gable and Spencer Tracy also star together in Test Pilot (1938) and Boom Town (1940). Each had his own legendary career, but catch some of Gable's films with Jean Harlow, like Red Dust (1932) and China Seas (1935), for more of his pre- Rhett Butler roles, and see Spence in Fury (1936) and Libeled Lady (1936) for more of his work from the same year. 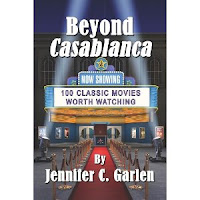 If you like reading about classic movies, you might also enjoy my book, Beyond Casablanca: 100 Classic Movies Worth Watching, currently available for just $4.99 on Kindle. Paperback editions are also available on Amazon and Barnes & Noble.com.
Posted by Jennifer Garlen at 5:22 PM