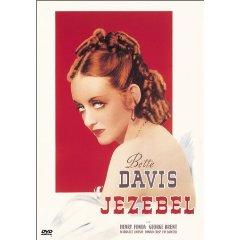 Going through my lists of films watched and reviews written, I realize that there's a lot of Bette Davis in the mix. She's certainly one of my favorite actresses, although the more I read about her the more I realize that I like her much better on screen than I would have in real life. That's true of a lot of Hollywood celebrities; their oversized personalities, like stage make-up, work better from the distance of the theater seat. Up close they're just too much to handle. 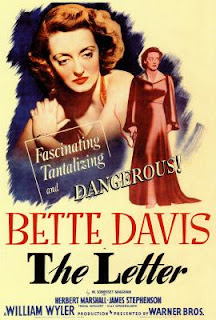 My admiration for Bette has a lot to do with her talent for self-transformation in the name of art. Unlike some leading ladies, Bette Davis never shied away from unglamorous or even ugly roles. She embraced them as opportunities to push her ability to inhabit a character. Even when she played relatively sympathetic heroines, she invested them with an edge that complicated their choices, making us see morality as a sort of gray area for women rather than a black and white sense of good and evil. She could be very funny in comedic roles, as her few forays into that genre prove, but her best parts tended to be in melodramas, commonly called "women's weepies" because of the audience and the tone of the pictures.

Here are all of the Bette Davis films I have watched and written about since I started doing the Classic Movies Examiner column: 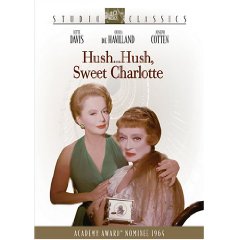 I've also seen some of her late films, including WATCHER IN THE WOODS (1980) and THE WHALES OF AUGUST (1987), and of course I have seen ALL ABOUT EVE (1950) and WHAT EVER HAPPENED TO BABY JANE? (1962). She made a lot of movies over her long career, and it will be quite a while before I run out of Davis pictures to watch for the first time. I know I can always count on her to deliver a worthwhile performance, even if the movie itself falls short. It's very hard to choose a favorite among so many excellent roles, but I do love JEZEBEL and HUSH... HUSH, SWEET CHARLOTTE, both films in which Bette plays a Southern belle.