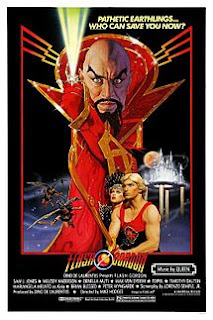 The 2018 Huntsville Comic Con opened with a screening of the 1980 cult classic Flash Gordon with a Q&A featuring special guest Sam Jones, who played the title character in the film. An excited audience gathered on Thursday, March 29th, to see the movie on the big screen and ask its star a few questions.

The screening itself was a big success, with a good crowd for a town like Huntsville and an excellent sound system that blasted the Queen soundtrack in all its glory. The vibrant colors of the sets and costumes still pop, and the audience cheered as Flash played football with a giant egg, fought future 007 Timothy Dalton on a hazardous tilting platform, and saved the Earth from Max von Sydow's sneering Emperor Ming.

Nearly forty years after its original release, Flash Gordon continues to be a campy sci-fi delight, with stand out performances from Dalton, von Sydow, Brian Blessed, and Topol. Other memorable actors in the cast include Melody Anderson as Dale, Ornella Muti as Princess Aura, Peter Wyngarde as Klytus, and Richard O'Brien as Fico. Along with Dale and Dr. Zarkov, Flash travels to an alien world and fights to save his own planet after Ming the Merciless makes Earth his latest plaything. While Ming lusts after Dale, Flash struggles to unite the warring factions of Ming's court in a rebellion against the tyrant, but his efforts are complicated by Princess Aura's attraction to him and Prince Barin's resulting jealousy. The heroic adventures conclude in a grand battle to take down Ming and rescue Dale from her forced marriage to him. Queen's earworm theme for the film punctuates key moments with campy enthusiasm, while Danilo Donati's costume designs fill the eye with vivid color and quite a bit of female flesh. The final effect is more Barbarella than Star Wars, full of S&M undertones and visual hyperbole, but clearly reveling in both. 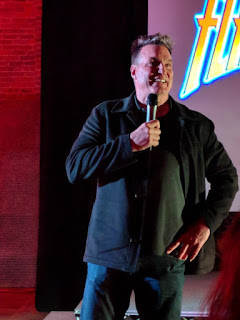 After the screening, Sam Jones took the stage to answer questions from the audience, but he was less interested in talking about the making of the film and more focused on his personal life, later career, and thoughts about acting in general. He discussed his appearance in Ted (2012) and his current film project, The Silent Natural, which does not yet have a release date. Those looking forward to an in-depth talk about the origins of Flash Gordon, its history as a comic strip and serial, and personal anecdotes about Timothy Dalton, Max von Sydow, and Brian Blessed were disappointed, but the audience was treated to Jones' positive opinion of Steven Seagal and lingering grudge against Arnold Schwarzenegger.

For those who really want to learn more about Flash Gordon, the Blu-ray release features an interview with Alex Ross and the first episode of the 1936 serial starring Buster Crabbe in the title role. You can also explore the history of the comic strip online. Empire Online has a detailed article about the 1980 film called "Gordon's alive! The untold story of Flash Gordon."
Posted by Jennifer Garlen at 10:39 AM