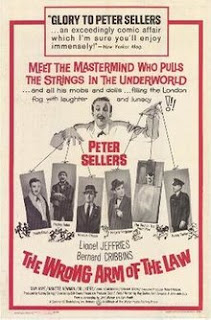 Directed by Cliff Owen, The Wrong Arm of the Law (1963) provides a genial, humorous look at the symbiotic relationship of cops and crooks in mid-century London, with Peter Sellers appearing to great effect as a criminal gang boss and Lionel Jeffries co-starring as an ambitious officer of the law. The picture is primarily a heist plot with plenty of comic twists, including the disruption of the "natural order" by a group of Australian interlopers who pose as coppers to make off with the bandits' boodle. Sellers gives a delightful performance that puts his chameleon talents on display, while Jeffries bumbles hilariously behind and beside Sellers' quick-thinking crook. Bernard Cribbins also makes a memorable appearance as one of Sellers' partners in crime, while the lovely Nanette Newman plays Sellers' duplicitous girlfriend.

Sellers stars as Cockney crime boss Pearly Gates, who masquerades by day as a legitimate French businessman who makes ladies' dresses. When his criminal jobs are repeatedly upended by a trio of "cops" who make off with the haul and leave the crooks behind, Pearly realizes that a new gang is using police uniforms to rob the robbers. Meanwhile, the determined but incompetent Inspector Parker (Lionel Jeffries), tries to nab Pearly's men but can't find any of the stolen goods. Pearly and his fellow crime boss, Nervous O'Toole (Bernard Cribbins), propose a collaborative effort with the police to shut down the fake cops once and for all, but Pearly doesn't suspect that the interlopers' inside informant is his own girlfriend, Valerie (Nanette Newman).

It's great fun to watch Sellers shift between his refined French persona and the Cockney patter of Pearly Gates, especially when other characters force him to switch gears quickly. Pearly is clearly the smartest person in the room, except when Valerie is around, and then he discloses all his plots and jobs without ever suspecting that he himself is being played. Inspector Parker, inevitably teased as "Nosy" by everyone else, is a bumbling foil and eventual sidekick to Pearly, with Sellers and Jeffries playing off each other in several key scenes, especially in the third act.

Most entertaining, however, is the absurdly orderly world of London's criminal gangs, an inoffensive set, really, who surrender without a fuss when caught and never hold a grudge against the police for arresting them. Cops and robbers is just a game here, without real danger or consequences, and thus a cat burglar can enter the room of a sleeping young woman and steal only her valuables and perhaps a secret kiss (one that also slips her earring from her ear!). The London thieves are easy pickings for the fake cops because it doesn't occur to any of the crooks to fight back against men in uniform, and when given the opportunity the thieves simply make their escape. Their adherence to order reaches its ridiculous height in the scene where Pearly calls a meeting of all of London's criminal elements, and the gathered crooks and cons religiously observe Robert's Rules of Order. They are, in fact, much more organized and effective than the police, a fact that becomes clear when the cops botch their parts of the plan to catch the Australian gang in the act.

The action in The Wrong Arm of the Law zips along and keeps the viewer guessing about where all of these shenanigans will lead, and if you've exhausted the available stock of Ealing comedies this film makes a great follow-up. Peter Sellers is best remembered today for the Pink Panther films, Being There (1979), and Dr. Strangelove (1964), but you can also see him with Alec Guinness in The Ladykillers (1955). Watch for John Le Mesurier as the Assistant Commissioner, along with Dennis Price and a young Michael Caine in uncredited roles. Cliff Owen went on to direct The Vengeance of She (1968) and No Sex, Please: We're British (1973). Catch Lionel Jeffries in Camelot (1967) and Chitty Chitty Bang Bang (1968); Jeffries also directed Bernard Cribbins in The Railway Children (1970). Nanette Newman appears in The Stepford Wives (1975) and as the adult Velvet Brown in International Velvet, a 1978 sequel to the original film starring Elizabeth Taylor.
Posted by Jennifer Garlen at 2:16 PM