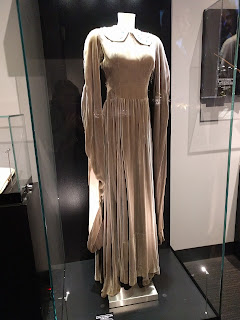 We spent spring break in Los Angeles and Anaheim this year, ostensibly to tour colleges for our teenager (whose dream school is Cal Arts). While I was once again too early to revel in the delights of the TCM Film Festival in Hollywood, I did manage to enjoy plenty of movie buff destinations, from Hollywood Blvd. to Disneyland. One of our best side trips was a morning at the Warner Bros. Studios in Burbank, where we took in a guided tour. Lauren, our tour guide, was a TCM addict and classic film fan, so she was the perfect person to tell us all about the studio's golden age stars and productions!

Here are a few photos of classic Hollywood items from the museum showcase near the end of the Warner Bros. Studio Tour. 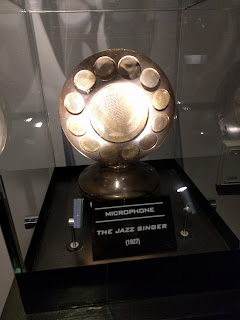 First up is a dress worn by the great Olivia de Havilland in The Private Lives of Elizabeth and Essex (1939), which also stars Bette Davis and Errol Flynn as the title characters. It's not one of the more elaborate costumes from the film, but it was still wonderful to see something the actress wore in the picture. It was even nicer because de Havilland celebrated her 100th birthday last summer and is still with us.

Also on display is the microphone used in The Jazz Singer (1927), which is, of course, the perfect item to symbolize the picture that really ushered in the talkie era. It's so big that I inevitably thought of Singin' in the Rain (1952) when I saw it, remembering how much trouble those clunky nuisances gave Gene Kelly and Jean Hagen when their characters tried to make the jump from silent films to sound! 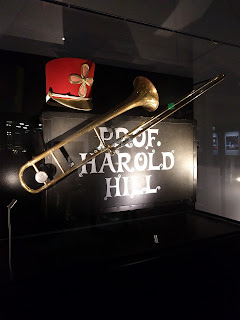 I was also delighted to find a few items from The Music Man (1962), starring Robert Preston and Shirley Jones. My husband and daughter were horrified when I immediately began singing "Seventy-Six Trombones" while staring at this display case, but, honestly, could you have resisted the urge? That trombone is right there. They're lucky it wasn't a costume worn by Ron Howard, or I might have struck up "Gary, Indiana" or "Wells Fargo Wagon" and never stopped.

These photos are just a fraction of what we saw on the tour, which took all morning and was worth every penny. If you find yourself in the LA area, I definitely recommend the Warner Bros. tour as a top pick. Although it also provides a lot of exhibits geared toward fans of modern movies and TV shows, there's plenty for classic movie buffs to appreciate. The only disappointment is the gift shop at the end, which has absolutely nothing to celebrate the studio's long history. Come on, Warner! Can't you even get us a Casablanca fridge magnet or a Rick's Cafe Americain coffee mug?
Posted by Jennifer Garlen at 10:18 AM