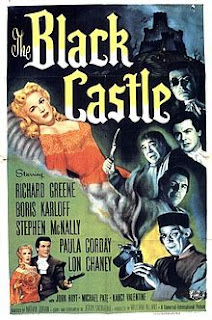 Boris Karloff and Lon Chaney, Jr., only have supporting roles in The Black Castle (1952), but their presence adds genre credibility to this minor period thriller directed by Nathan Juran, here making his directorial debut. Richard Greene, Stephen McNally, and Paula Corday are the real stars of the picture, playing a deadly game of deception in a Black Forest castle crowded with spies and Gothic atmosphere. Although it's by no means an essential example of its type, The Black Castle succeeds at providing a round of interesting performances and some modest chills, with Greene in fine heroic mode and Karloff amusingly inscrutable as the castle's secretive physician.

Richard Greene plays the Englishman Sir Ronald Burton, who comes to the Black Forest looking for the vengeful count (Stephen McNally) who killed his friends. Under an assumed name, Sir Ronald gains admission to Count Karl von Bruno's castle as a guest, but his investigation is complicated by his attraction to the count's beautiful wife, Elga (Paula Corday, also known as Rita Corday). When the count discovers the truth about Sir Ronald and Elga, their lives are in peril, but the sympathetic Dr. Meissen (Boris Karloff) offers them a dangerous chance to escape.

Greene, best remembered for playing Robin Hood in a 1960 TV series, makes a charming and likable protagonist, with an early sword fight scene establishing his heroic character. He looks good in his eighteenth-century costume, as well, so we understand why Elga might be attracted to the gallant Englishman instead of her sadistic spouse. Stephen McNally keeps his villain's rage more or less under control until the last quarter of the picture, but Karl still gives us plenty of warning that he's a very dangerous man, and when he finally cuts loose we see the real brute beneath the civilized facade. Corday is lovely as the forcibly wed Elga, although early on she doesn't act as though she understands the extent of her husband's cruelty, and shouldn't she know better than anyone? We get the strange idea that theirs is a chaste marriage, which might make The Black Castle more suitable for the matinee kiddies but doesn't at all address the horror of being married to a psychotic egomaniac.

The tame sexuality is a sign that The Black Castle isn't really a horror film at all, in spite of Karloff and Chaney lurking around the castle's dark corridors. The opening is the most horrific scene in the whole movie, with Sir Ronald and Elga about to be buried alive after taking a powerful drug to evade Karl's evil plans. The story then flashes back to show us how they ended up in such jeopardy. Karloff's Dr. Meissen wavers between good intentions and cowardice as he tries to help the pair escape from Karl, but he's mostly there to advance the plot, and Karloff has to make the most of what he gets. Chaney gets even less to do as the mute henchman Gargon; almost anyone could have lumbered around and grunted in the few scenes where he appears, looking like a cross between Igor and Quasimodo. The more interesting henchman roles go to John Hoyt and Michael Pate as Karl's fellow counts, Steiken and Ernst, with Pate basically reprising his role from The Strange Door (1951).