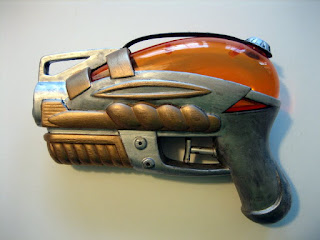 Steampunk is the kind of thing our whole family gets excited about, and we've been eager to find a DIY steampunk project we could handle with minimal tools and experience. Steampunk guns are a good starter project because you can get the materials for a small amount of money and don't need a lot of equipment already on hand. These aren't the most gloriously detailed examples of steampunk weaponry, but they're a fun activity for families with geeky sensibilities (like ours).

PS - It helps to play Professor Elemental's "Steampower" or at least belt out the theme song from "Flash Gordon" while you work on these. Flash! Aaah-aah! 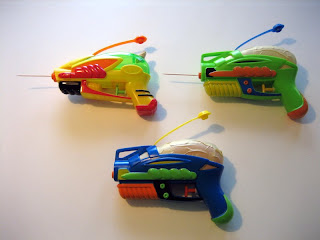 1) Cheap water pistols and some tape - Tape up the parts you don't want to cover with the black matte paint. We put toothpicks in the barrels to keep them from being clogged, since we might actually want to USE the water pistols later. We taped the water chambers on two guns to leave them untouched in the final versions. We bought three guns in a pack for about $5 at Target. 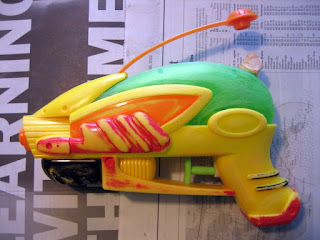 2) Sand paper to roughen surfaces - The sanding helps the paint stick to the plastic but also gives the pistols a used, battle-action look. 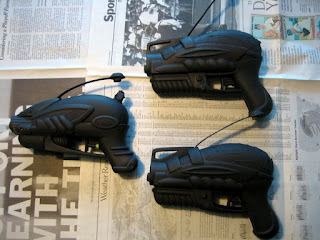 3) Spray paint guns with black matte paint - Actually, they look pretty cool all black. Do this outside, away from the wind, unless you want furniture and kids to end up being painted, too. The spray paint dries quickly, so you don't have to wait a long time to move on to the next stage. The trigger areas are the hardest parts to paint. 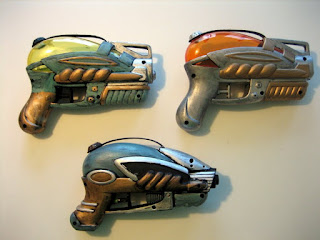 4) Apply rub and buff metallic paint - The Husband watched a video where two guys just used their fingers for this part, but we found fine tip paint brushes to be a big help in getting the crevices painted. Use at least two colors to get some contrast. We used patina, silver, and gold on our guns. After painting, buff the whole thing with a cloth to heighten the shine and make the metallic surface look better. Some of our guns are better painted than others, but, hey, one of us is only 10.


5) Apply decorative elements - Our guns are plain for now, but you could dress yours up however you like, with gears, coils, leather wraps, or detailing. Have fun!
Posted by Jennifer Garlen at 3:49 PM