Cupids Whispering in Her Ears: Roxanne's Earrings in 'Roxanne' 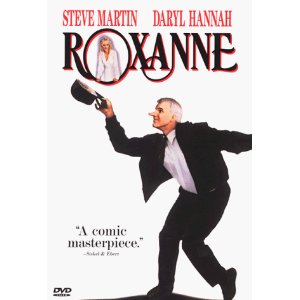 Costume is one of the most important ways for films to offer clues to their characters' identities and natures. To some extent this is true in stage drama, as well, but films have the opportunity to view characters up close and at length; the camera can rest upon minor details of costume and emphasize them in ways that are impossible for stage dramas to emulate. One excellent example of the importance of this kind of detail can be found in Roxanne (1987), a modernized film adaptation of Edmond Rostand’s classic stage play, Cyrano de Bergerac. In the film, Roxanne's Cupid earrings draw the viewer's attention; throughout the prelude to the pivotal balcony scene, the camera repeatedly zooms in on her face, which is flanked by a pair of pink and white winged Cupids with bows and arrows in their hands. Although they are certainly garish by today's fashion standards, these earrings are symbolically appropriate to Roxanne's character, and they highlight one of Cyrano de Bergerac's most important themes, that of the intellectual and spiritual nature of true love.

Throughout the film, Roxanne's costumes reflect her role as a romantic figure, a woman made to love and be loved. Following the spirit of the original character in Cyrano de Bergerac, Roxanne, played by Daryl Hannah, appears as a soft, feminine woman. In the play, Roxane is first described by an admirer as a "flawless peach with the faint perfume of a strawberry," which indicates the essential softness and sweetness of her nature (Act One, page 8). Although the film modernizes Roxanne by making her a scientist by profession, her appearance emphasizes these same traits and is neither severe nor "geeky." She wears skirts and outfits in light pastel colors with long, flowing lines. She wears her long blonde hair down in loose, gentle curls. She occasionally dons a pair of glasses as a nod to her intellectual side, but the overall emphasis of her appearance is decidedly graceful and soft. Her Cupid earrings match the rest of her attire because they are also light colored and feminine, even though they seem large and oddly dated to a viewer in 2011. In the late 1980s, when the film was made, fashion trends favored larger and bolder jewelry, so Roxanne's accessories would not necessarily have struck the film's original audience as tacky or distracting. As Cupids, they symbolically identify Roxanne as a romantic figure; she becomes a sort of Venus, a goddess of love, by her association with the mythological image of Cupid. Thus the earrings continue the work of the rest of her costume by emphasizing her connection to love and romance.

More importantly, however, the Cupid earrings subtly suggest one of the original play's most important themes, one that is carried over into the 1987 cinematic adaptation. Roxanne does not wear a Cupid over her heart, as a necklace or a brooch, for example; she wears them in her ears. Their placement there reminds us that the way to Roxanne's heart is through her ears, through the words that C.D. (Steve Martin) pours out to her in his letters and in the balcony scene. In the original play, Roxane becomes angry with Christian when he cannot fulfill her command to "be brilliant! Improvise!" (Act Three). In the film, as well, Roxanne dismisses Chris (Rick Rossovich) with contempt when he fails to "say something romantic." Even though both versions of the character are initially attracted by physical charm, both quickly demand more than a mere pretty face. Both Roxane and Roxanne are ultimately moved by a voice, that of Cyrano/C.D., drifting up through the darkness and unconnected to a physical form. The eyes may be the windows through which the soul looks out, but the ears are the passages through which another soul reaches in.
Posted by Jennifer Garlen at 9:56 AM