Scenes from a LEGO Western

If you have been reading this blog much over the years, you know that I love classic Westerns. I grew up watching them with my father and grandfather, and I've always had a nostalgic love for the Old West. You also know that I love LEGO and am an active member of a large LEGO hobby club for adults. For our show this weekend at a local science museum I decided to combine those passions and create a Wild West LEGO display. Here are a few photos of the results! 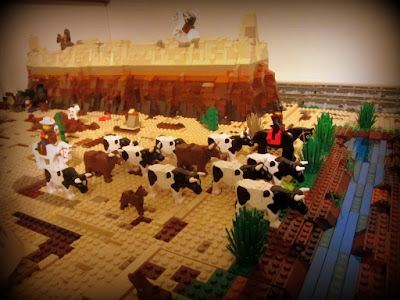 Plenty of classic Westerns focus on the cattle drive, so I've got one going on in my display. Two cowboys and their dog are driving the herd across the desert frontier, but it looks like they've found a good watering hole. In the background you can spot the Lone Ranger and Tonto off to save the day and Stinky Pete the Prospector mining for gold. 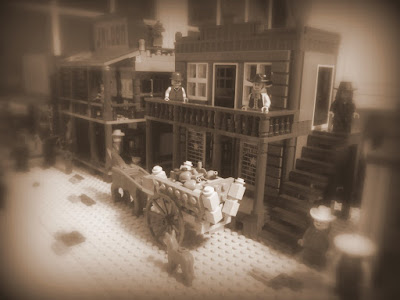 Western towns are rough and tumble places, but the Sheriff's office looks popular. Of course, if the sheriff gets thirsty, he's right next to the saloon. I wonder if it's John Wayne, Jimmy Stewart, Henry Fonda, or Gary Cooper wearing the badge in there? Maybe one day I'll recreate Destry Rides Again or My Darling Clementine. 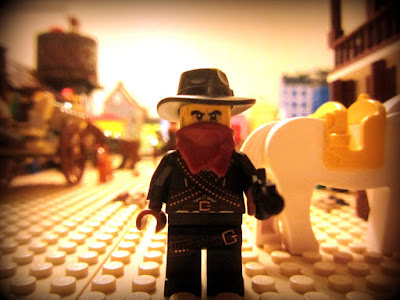 The gunfighter is more spaghetti Western than Hollywood. He's definitely a tough character, but I think the sheriff can take him. I also have robot cowboys to stage a Westworld shootout later on!

If you like the LEGO movie stuff, you might also have a look at my LEGO Dracula post. There are a couple of tributes to classic film noir, too.

Posted by Jennifer Garlen at 9:23 PM